Beyond the Pale Motel 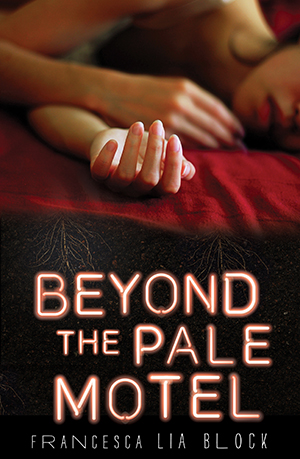 “Francesca Lia Block is a bright, golden thread in the literary landscape of Los Angeles. I have looked to her novels as inspiration for myself as a writer; she is a wizard of metaphor and imagery while at the same time deftly constructing stories that compel a reader forward. Francesca's work stares unblinkingly into the face of human complexity, of suffering as well as love and joy. She's a master (mistress?) of the craft. Would that my muse give me half the talent she has.”~ Samantha Dunn Camp, author of Failing Paris

"I've been reading Francesca Lia Block's works since I was a kid (maybe you've heard of her Weetzie Bat series, which stands as work of iconic '90s literature). She's known for crafting dark YA, but her latest novel, Beyond the Pale Motel, is definitely for grown-ups only. Set in the trendy Silver Lake and Echo Park neighborhoods of L.A., the story follows Catt, a sober hairdresser whose husband suddenly leaves her. Meanwhile, a murderer is terrorizing Hollywood. Catt's life begins to spiral — a spiral that includes some incredibly steamy, X-rated sex scenes — and she becomes convinced that the killer is hunting her best friend. Reading this erotic thriller is like floating in and out of an intensely sexy and terrifying dream. That is to say, a dream that is super entertaining. ~ Leonora Epstein Buzzfeed

“Beyond the Pale Motel is sadder, darker, grimmer [than anything Francesca Lia Block has written], yet still glinting in spots with ethereal light and her trademark belief in the saving power of love.”

"Mesmerizing and at times haunting, Beyond the Pale Hotel is about how longings can warp us or shape us into something stronger."
~Gary Phillips, author of Warlord of Willow Ridge

"Beyond the Pale Motel is a can't-stop-reading, gasp-out-loud sexy thriller that keeps you guessing at every turn.  Block holds up a dark mirror to the traditional love story.  She creates characters so real you feel they've done your hair, heard your sob story, slept in your bed.  Block reflects Los Angeles with as much distinction as Raymond Chandler and John Fante, but her Los Angeles has the cotton candy colored sunsets in the smog and the dark magic of the shadows."~Laura Lee Bahr, author of Haunt

"Beyond the Pale Motel is a fast-paced, original, and highly sensual novel, set in an L.A. characterized by isolation and darkness, where true love is elusive in any of its forms.  Block paints a convincing portrait of a woman in crisis, abandoned to her own self-destructive devices."~Steph Cha, author of Follow Her Home

"With a protagonist who's looking for love in all the wrong places, Francesca Lia Block's new novel is sexy and grim."~Ellen Datlow, editor of The Best Horror of the Year